There are actually several different ways of previewing the project you are working on in After Effects.  The Preview window contains lots of options, which may be hidden until you expand the panel to its full dimensions.  By default, there are three basic methods of previewing your composition, each of which can be further customized.  Note that these may change slightly from version to version of After Effects, but they can always be customized in the Preview panel.

Pressing the space bar will preview your composition without cacheing the frames first.  This means that After Effects will attempt to play what you are working on in real time, as best it can.  If you have a fast computer or a simple composition, this may work fine.  However, your playback may start to slow down or stutter.

Pressing the zero key on your number pad will cache the frames in your composition before playing them back.  This is called a RAM preview – essentially, After Effects is temporarily rendering your composition before playing it back.  You may have noticed a green line near the top of the timeline panel.  Areas that are green have been cached and should play back relatively smoothly.  When you press the zero key, that green line will gradually fill up.  When it fills the timeline – or when you press zero again – the preview will play.  Note that you must press the zero key on the number pad for a RAM preview – not the zero key in the numbers along the top of the keyboard. 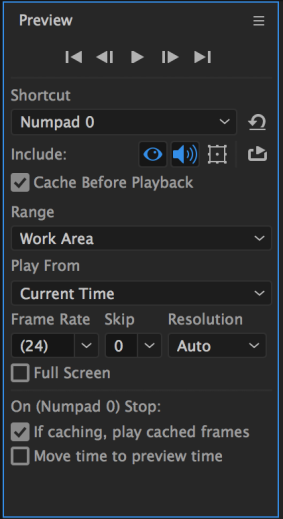 One nice thing about the bevy of preview options in After Effects is that you can really customize how they operate.  In the preview panel, you’ll find options for resolution, sound, looping, and much more.  You can choose whether the preview plays from the beginning of the composition or from wherever the playhead is.  If you always want your preview to play in full screen mode, there is an option for that.  Because previewing footage in After Effects is so intensive, it’s extremely helpful to have these options.

Thanks to Matt for sending these videos from talented animator Jazza.  The following short film was done over a single twelve hour period, which was streamed to viewers live.  Jazza animates using Flash, so the workflow is a little different than what we use in After Effects, but you can still pick up some useful tips from watching him work.  Be sure to check out the time lapse video, in which he discusses the making of the film.

From the excellent site SoundWorks Collection, here are a handful of video essays discussing sound design in the animated features Inside Out, The Little Prince, and How to Train Your Dragon 2.

Hidden meanings and conspiracy theories abound in these videos that delve into cartoon mysteries.

Here are a few random tips and techniques that may help you as you work on your mid-semester projects.

Animating a run cycle is very similar to animating a walk cycle, although the poses are slightly different.  Animator Alan Becker, who summed up walk cycles so nicely, breaks the run cycle down into the following components: the “contact” pose, where the heel of leg one is just meeting the ground and leg two is the farthest back and elevated; the “passing” pose, where leg one is bent and moving back and leg two is passing it from behind; the “kickoff” pose, where leg one is now back and pushing the figure up and leg two is forward and elevated; and the “up” pose where both legs are in the air, leg one back and leg two forward.  These then cycle again until leg one is back to its original position and the cycle can be looped.  Much like the walk cycle, the arms swing in the opposite direction of the legs, so the left arm is forward when the left leg is back and so-on.

The same tips for animating walk cycles apply to run cycles: go slowly, animate one limb at a time instead of everything at once, rearrange your workspace for maximum efficiency, don’t feel frustrated if it doesn’t look right at first.  This kind of movement is challenging to animate, but it’s a terrific learning experience.

When you have your run cycle completed, you can loop it in the same ways we looped the walk cycle: by copying and pasting the keyframes, duplicating the composition, or using an expression. 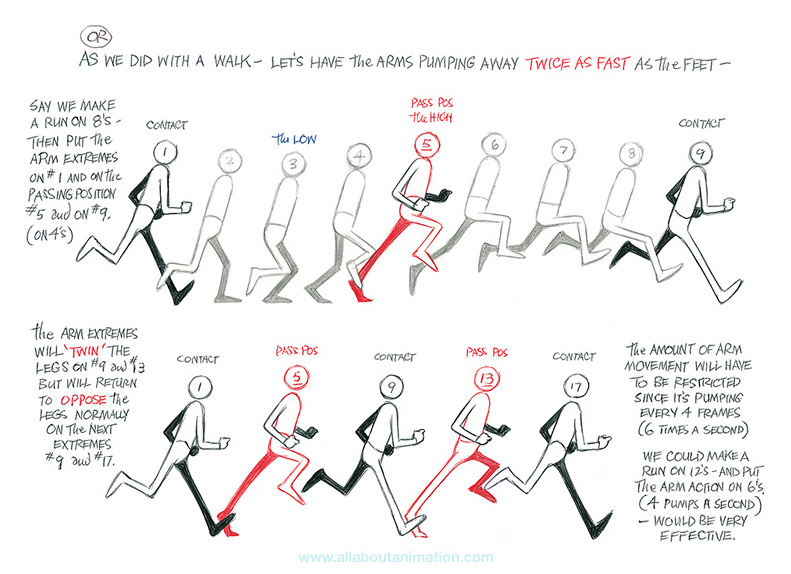 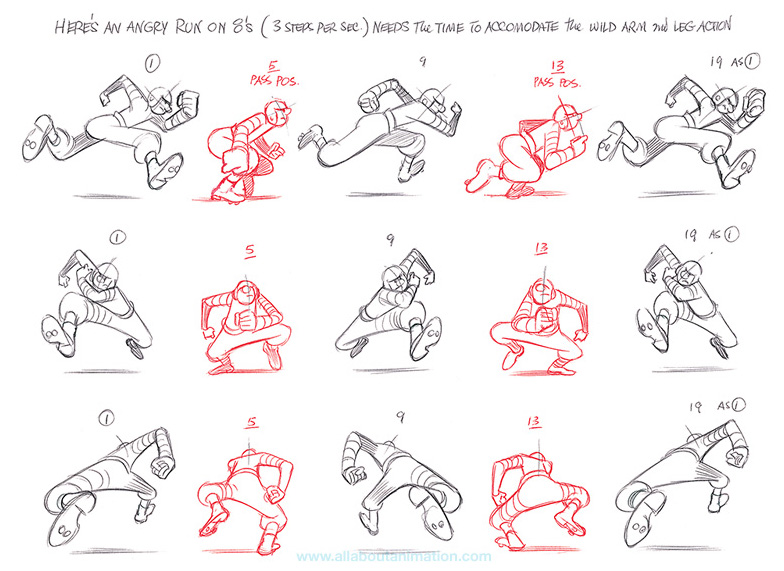 If animating a full walk or run cycle is feeling overwhelming, you might want to consider some creative ways of “cutting around” those kinds of movements.  The fact that your character is moving from one location to another does not mean that  you need to show a full-body walk cycle in all its complexity.  Instead, feel free to use editing to hide movements that are too complicated, time-consuming, or confusing to animate.

Here are two shots of a character walking.  In the first, the entire body is animated doing a full walk cycle.  Note the number of layers that have keyframed animation in the timeline – this character has seventeen body parts all moving in tandem with either their position or rotation (or both) keyframed.

To simplify this walk, we can zoom in on the character so that the legs are no longer visible and animate their position from one side of the screen to the other.  This achieves the same basic effect – we see the character walking – but it can be done by animating only three layers.  The changing position along with the swinging arms are enough to suggest that the character is walking.

Now, I want to make it clear that I am not suggesting that you should always take the easy way out when it comes to animation.  Things like walk cycles are important to master.  Animation is always a time-consuming process, though, and the finished piece is more important that its components.  If you can achieve the same effect using a quick and simple method or a slow and complex method, why not give yourself a break?  Stay true to your vision, but don’t make the process harder than it needs to be.

There’s no real formula for creating multiple versions of a character; to some extent, it’s dependent on your own artistic ability.  As always, use lots of reference images to get the design, proportions, and perspective correct.

One thing that I have personally found immensely helpful is to create one version of a puppet from another.  If you are working in Photoshop or Illustrator, this is pretty straightforward.  Just open up the existing puppet, save the file as a new version, and start modifying what you have.  You want to pay particular attention to things like the height of the eyes and overall dimensions of the character.  It may be useful to draw some guidelines to keep everything aligned. 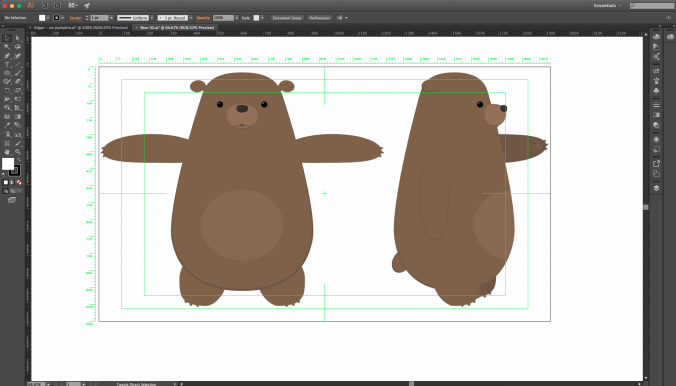 I mentioned this previously, but if you really want to avoid doing multiple versions of the same character, I find the “three-quarter” view the most versatile, since it allows the character to face forward, but still be animated in a walk or run cycle.  If you’re having trouble getting a certain perspective on your character just right, there is absolutely no shame in reimagining a shot or sequence to work with a different angle.  These kinds of issues are precisely the reason that animation is planned so meticulously in advance.

The characters that we’re animating in After Effects are two-dimensional, but we can still give the illusion that they exist in 3D space.  One simple way of doing this is by subtly moving the features around on a character’s head.  Animator Ross Plaskow covers this technique in the tutorial below, with his typical wit, clarity, and profane snark.

If you really want to take your animation to the next level, there are some slightly more advanced techniques that you can incorporate.  In a walk or run cycle, for example, you can offset the animation of the head or hands so that they drag slightly behind the movement of the torso and arms.  This gives visual interest and physicality to the animation.

You can also add “bounce” to your animation.  Adding a few frames of anticipatory movement or recoil can make a simple movement seem a lot more alive.  Again, Ross Plaskow has a helpful and entertaining tutorial.

We’re not doing any synchronous audio just yet – the mid-semester project is essentially a silent movie.  You may, however, add sound effects, music, and tone.  After Effects makes it pretty easy to add audio to projects; it accepts a variety of formats and they can be dropped into the timeline just like any other piece of media.

With your audio in the timeline, you’ll have access to a few new options.  Instead of a “visible” icon (the eyeball on the far left side of the timeline), the is an icon that looks like a little speaker.  Clicking this icon makes the speaker disappear and mutes the audio.  Media with audio and visual information (like video files) have both a visibility and an audio icon in the timeline.

If you open the timeline properties for a piece of media with audio, you should see an “Audio” section, which contains audio levels.  These can be keyframed, which means that music can be faded in and out and levels can be adjusted overall.  Below the audio levels is a section called “Waveform,” which shows a visual representation of the audio.  The keyboard shortcut for audio levels is the L key.  Pressing L twice quickly will bring up the waveform.

Compositions and pre-compositions with audio have these controls as well.  Because it can be confusing keeping track of what audio is in which comp, I’d suggest adding your audio to the master comp where all your shots are collected.  I generally recommend adding audio after your shots are created and timed out, unless you’re doing something like a music video (in which case, the audio should be driving the visuals).  Compositions with audio should render with audio once they are added to the Render Queue, although you may want to double-check this in the output module.

Need some audio files to get started?  Check out the newly-added RESOURCES page, which contains links to lots of royalty-free media.

What Else?
There are lots of other little things we could cover, but I want to know what will be helpful to you.  What do you need to know in order to complete your project?  How to animate a specific movement?  The timing of a sequence?  Further details on the use of sound and audio design?

Have a great break!