The Illusion of Life

Let’s take care of a few more basics in After Effects and move on to character animation.  While After Effects is most often used for effects work and motion graphics, its versatile toolset makes it a very capable tool for animation.

To create one, go the the Layer drop-down menu at the top of the page and go to New>Adjustment Layer.   An adjustment layer the size of your current composition will be created and placed in the timeline.  After Effects also lets you modify adjustment layers in interesting ways by using masks.  For example, you can use a circular subtract mask on an adjustment layer to create a simple vignette.  Note that while adjustment layers have transform properties, modifying those properties does not affect the layers below – only effects are applied.

If you do want to apply things like scale and rotation using an adjustment layer, it ispossible, however.  In the “Distort” section of the effects, there is one called “Transform.”  This is a set of the usual transform properties – anchor point, position, scale, rotation, and opacity – that can be applied as an effect.  If you add the transform effect to an adjustment layer, that effect will be applied to the layers below.

In addition to dragging one composition into another, you can choose certain layers within an open composition and make a new composition out of them – without ever leaving the timeline you are working in.  After Effects calls this “pre-composing.”

Once the layers have been pre-composed, the new composition will appear in the old composition as a single layer.  It will also show up as a new composition in the list of project media.  If you double-click on the pre-composition, it will open up in the timeline and preview windows.  Pre-composing media is a great way to clean up a chaotic composition (sometimes you just have way too many layers in there), as well as a simple method of applying effects and transformations to multiple layers at once. 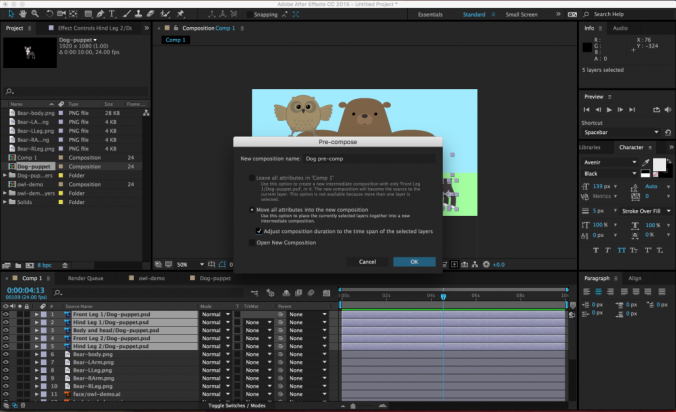 Parenting is a unique feature in After Effects and it’s incredibly powerful.  When you parent one layer to another, the “child” layer will be affected by the scale, position, and rotation of the “parent” layer.  Parenting does not affect opacity, effects, or masks.

Parenting has some very basic and commonplace applications for things like lower thirds and title design.  For example, you could parent a text layer to a solid layer, then animate the solid layer sliding into the frame.  The text will keep its position relative to the solid and slide in with it.  This keeps your animation consistent and means that you only need to keyframe properties on one layer instead of two.

Under the Layer drop-down menu, you can also create a “Null” object (Layer>New>Null Object).  Null objects don’t appear to do anything at first, but they are very useful as parent layers.  You can parent several child layers to a null and then affect them all simultaneously.

Now that we know how to parent objects, pre-compose layers, and adjust anchor points, we can move on to actual character animation.  Let’s start with some simple pre-made figures – you can download a few at this link.

A simple puppet might have the figure’s arms, legs, head, and body on different layers.  Complex puppets will break down the figure more and more – you might have separate layers for parts of the face, finger segments, clothing, and more.  Basically, any part of the figure that you want to animate should be on its own layer.

You can import these layers individually, but After Effects is also very good at playing with files created in other Adobe programs.  If you create your puppet in Photoshop or Illustrator, you can import those files with their layer structure intact.  When you import an Illustrator or Photoshop file, simply change the Import As drop-down from “Footage” to “Composition – Retain Layer Sizes.”  (The “Composition” option will work also, but I find “Retain Layer Sizes” easier to work with.)  If you’re using a Photoshop file, another screen may appear with the option to keep or merge your layer styles – I tend to choose “merge.”  Once you’ve imported the file, it will appear as its own composition with each layer separated out.  Note that you will only get the dialog box with these import options if you use  Cmd+I or File>Import – if you just drag an Illustrator or Photoshop file into the project window, all the layers will be combined into one piece of media.

One benefit to creating your puppets in Illustrator (or using shape layers within After Effects) is that the puppet can be scaled up infinitely without losing quality.  That’s because Illustrator is a vector-based program, as opposed to something like Photoshop, which uses pixels.  To enable this ability (it is turned off by default), you need to check a box in the timeline that looks like a little sun – if you hover your mouse over it, it will say “For vector layer: Continuously Rasterize.”  For pixel-based artwork, you will start to lose image quality as you scale up, but you can control how After Effects processes the image using the column next to the sun that looks like a pixelated diagonal line.

While animating using the transform properties can achieve very sophisticated results, the animated characters can sometimes look a little stiff.  When we watch a cartoon, we are accustomed to seeing things move in “elastic” way: stretching as they build up speed and squashing when they land.  We can achieve this effect in After Effects using Puppet Pins.

Set up your character in the same way we went over last time: position the anchor points on the joints, move the layers into position, and parent everything appropriately.  Once everything is in place, it’s time to add some pins.

Puppet Pins are a tool for deforming layers.  When you add pins to something in After Effects, the program generates a “mesh” over the object.  When you move a pin, that mesh shifts and the layer is deformed.  If you move a pin too much, you’ll get some funky results; the image will stretch too much and begin to tear.  Moving a pin just a bit can give some really interesting results, though.

To start adding pins, select the Puppet Pins tool from the menu bar at the top of the screen – it’s the one that looks like a pushpin.  In the timeline, select the layer you want to add pins to, then click on the layer in the composition panel to add a pin.  You should see a yellow dot appear where you clicked. 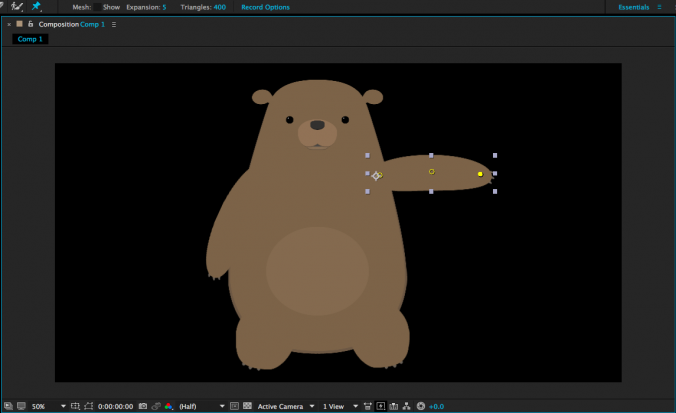 Pins have keyframes turned on by default, so you will add a keyframe every time you move a pin.  However, you can still move or rotate the layer itself without adding pin keyframes.  I like to add pin keyframes to accentuate movements; for example, I might add pins to a swinging arm to give the movement some elasticity.  Note that pins are not affected by parenting layers to each other – they move independently.  If you can’t see the pins, you can highlight the layer and click on the Puppet Pins tool again, or find the Puppet section of the layer in the timeline. 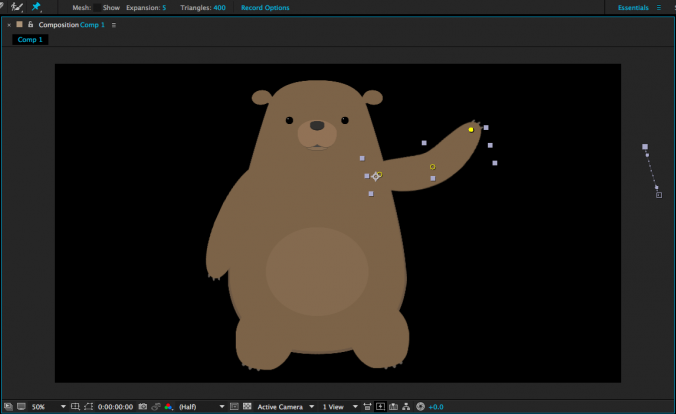 Occasionally, your pin may pull the layer apart in an unexpected way.  This is usually because the mesh that the tool generates is not covering the entire object.  When you have the Puppet Pins tool active, you should see some options next to the tool icon at the top of the screen.  Clicking “Show” box next to “Mesh” will reveal the mesh that is being generated to deform the layer.  If your mesh is cutting off part of the object, either add triangles or increase the “Expansion” property.

Puppet Pins open up lots of new creative possibilities.  Use them to make your animations seem even more alive!

Project 5: Bring a Character to Life

This week, I’d like you to start experimenting with character animation.  You can download the sample files to use or create a puppet of your own.  If you choose to create your own puppet, you can use several approaches: you can create it in Illustrator or Photoshop, draw it on paper and scan it, or build it out of shapes and solids within After Effects.  Don’t get too bogged down in the character creation process, though – we’ll be focusing on actually creating characters next week.

Either way, create a five to ten second scene with the character of your choosing.  You can animate using transform properties, puppet pins, or a combination of the two.  As usual, render it as a QuickTime movie using the H.264 codec, upload it to your Google Drive, and send me a download link.