So far, we’ve used After Effects for 2D motion graphics and animation work.  After Effects can also be used for 3D work – although there are some caveats.  After Effects is not designed to do 3D graphics work in the same way that programs like Maya, Cinema4D, and Blender are.  You can’t create detailed 3D models or complex environments in After Effects.  However, you can move 2D assets into the third dimension – and create some unique and dynamic results.

This week, we’ll be creating a simple 3D scene.  Download the images at this link if you’d like some media to play with.

You may have noticed a series of symbols at the top of the timeline window, next to the Layer Name column.  If you can’t see them, toggle the view options at the bottom-left of the timeline window.  These symbols represent different properties that can be turned on or off for each layer.  For example, the symbol that looks like a strip of film toggles frame interpolation, which is only applicable to video layers.  The box we want to use looks like a little wireframe cube.  This switches layers from 2D to 3D.

Clicking on this box will probably not make an immediate change to the way your composition looks.  However, if you look at the Transform options for that layer in the timeline, you’ll see that the possibilities have expanded greatly.

Position, for example, was formerly defined by two numbers – a value on the X (horizontal) and Y (vertical) axis.  In other words, that layer could formerly move up-and-down and side-to-side.  With the 3D box checked, a third number has been added – we can now move forwards and backwards on the Z (depth) axis.  The anchor point value has also gone from two variables to three.  Rotation was previously described by a single number, but now objects can be rotated three ways.  There is also a new “Orientation” value, which provides another set of rotation values.  Scale has gained a third number as well, although the new Z-scale value won’t generally affect 2D layers.

Let’s look at the rotation values first.  X Rotation spins an object around a horizontal axis, Y Rotation spins around the vertical axis, and Z Rotation spins around the depth axis (2D layers can only spin around the Z axis, so X and Y are the new options).  The best way to understand how these work is just to take some time playing with the values.  Remember that layers rotate around their anchor points.  So, if you want an object to swing open like a door, you’ll need to move the anchor point to the side of the object and keyframe the Y Rotation.  If you don’t change the anchor point, the object will spin around its own midpoint.

X, Y, and Z Rotation each have their own section under the Transform properties.  The Orientation section combines all three into a single keyframe-able value with three numbers.  I tend to use the individual Rotation values more than Orientation, but they both do the same thing.

It is possible to work with both 2D and 3D layers in the same composition, but they don’t really “interact” with each other.  If you rotate a 3D object so that it intersects with another 3D object, one will be “clipped” by the other.  A 2D object will simply float in front of or behind a 3D object, depending on its layer position in the timeline.

When you click on a 3D layer, you will probably notice a new icon appear in the composition window.  This icon is comprised of a green, red, and blue arrow, centered on the anchor point of the layer.  You can click and drag on the green, red, and blue arrows to move an object along the X, Y, and Z axis, respectively.  You can also change these values using the three numbers that now appear next to “Position” in the layer’s transform properties in the timeline window. 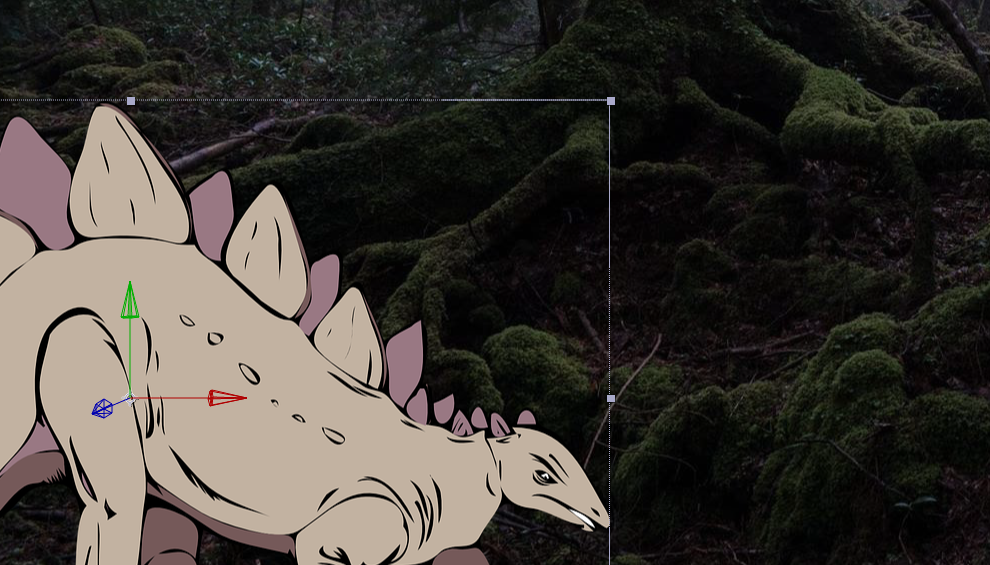 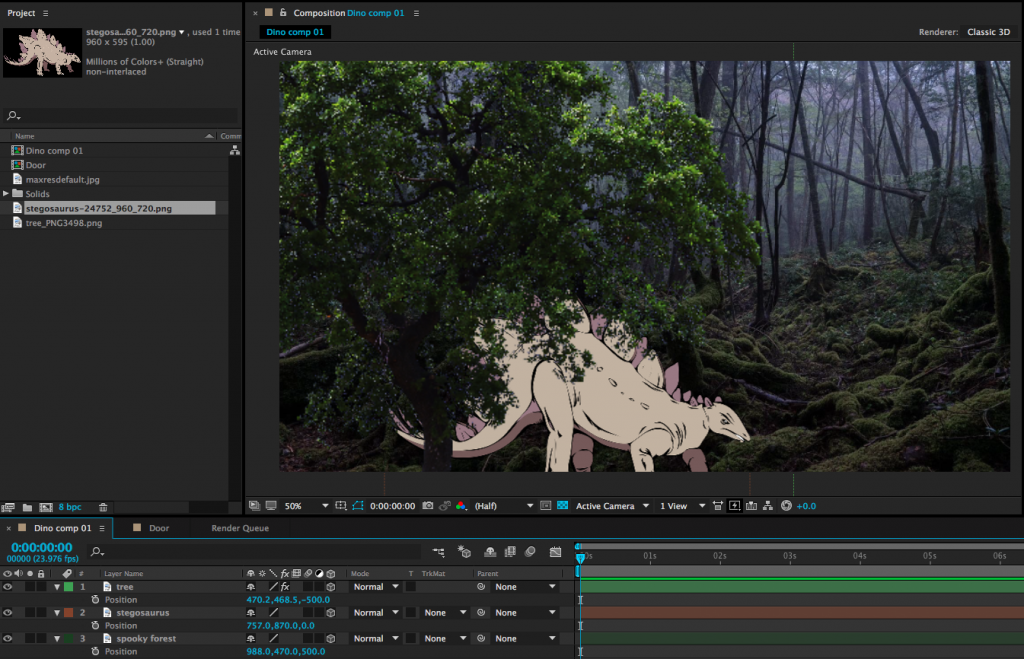 This can give us a nicely layered composition, but so far, we haven’t done anything we couldn’t do by adjusting the scale and position of 2D layers.  For example, you can make an object appear to move closer by increasing its scale.  So why use 3D position?  One reason is that it can be difficult to estimate the way that scale and position should correspond.  The other reason has to do with perspective and an effect that we can achieve only by using 3D layers – but for that technique, we’ll need a virtual camera.

In our 2D work, we used the After Effects composition window sort of like a collage board; flat layers were placed on top of each other, rearranged, and adjusted.  When we switch layers from 2D to 3D, that collage board becomes more like a shadow box; objects can move forward and backward in space.  Our perspective on the shadow box hasn’t really changed, though – our view is fixed.  By adding a camera to the scene, we can change our perspective and even move into the scene itself, going from a shadow box to a complete virtual environment.

To create a camera, go the the Layer dropdown menu at the top of the screen and choose New>Camera….  This will bring up a dialog box with lots of options.  You can dig into these values and customize your virtual camera as much as you like, but I’d recommend leaving most settings at their defaults, at least to get started.  The one thing you may want to adjust is the Preset, which has a handful of simulated lens options.  These act just like lenses on real cameras: wider lenses (lower numbers) have a larger field of view and Z axis movement will be exaggerated.  Longer lenses (higher numbers) have a narrower field of view and Z axis movement will be compressed.  If you aren’t sure what to use, either the 35mm or 50mm presets are generally safe, middle-of-the-road options. 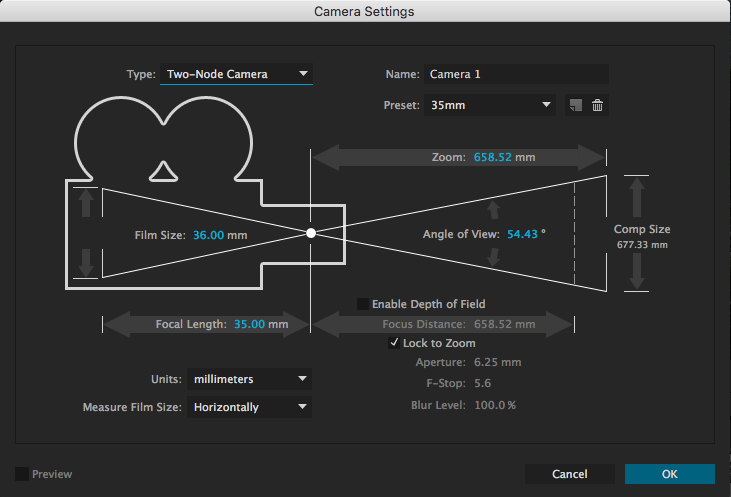 After you create your camera, you may notice an immediate difference in the scale of the objects in your composition.  This is because of the aforementioned properties of the lens on your virtual camera.  If you tip down the triangle next to the name of your camera layer in the timeline, you will see Transform properties and Camera Options.  The Camera Options section contains a ton of variables to play with – you can define the virtual depth-of-field, the shape of the simulated iris, the size of the aperture, and much more. 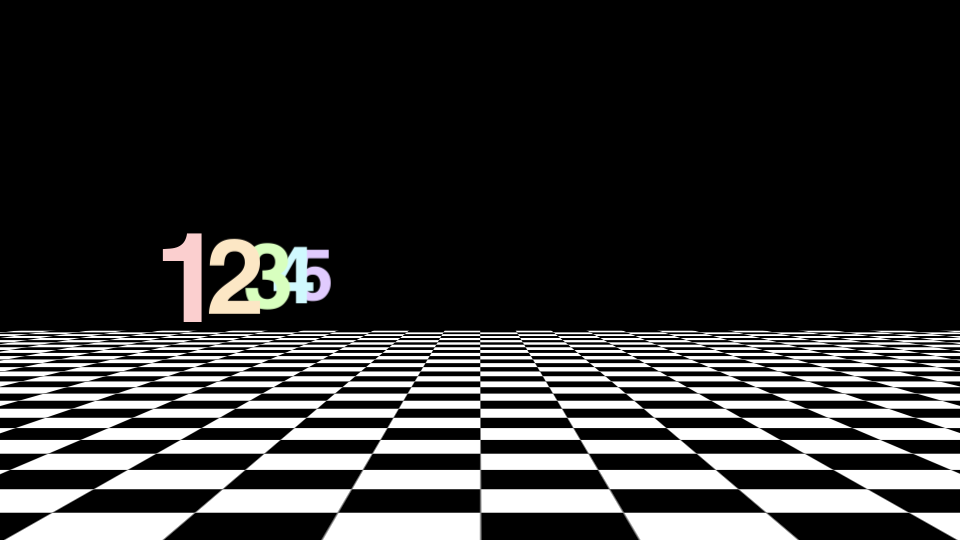 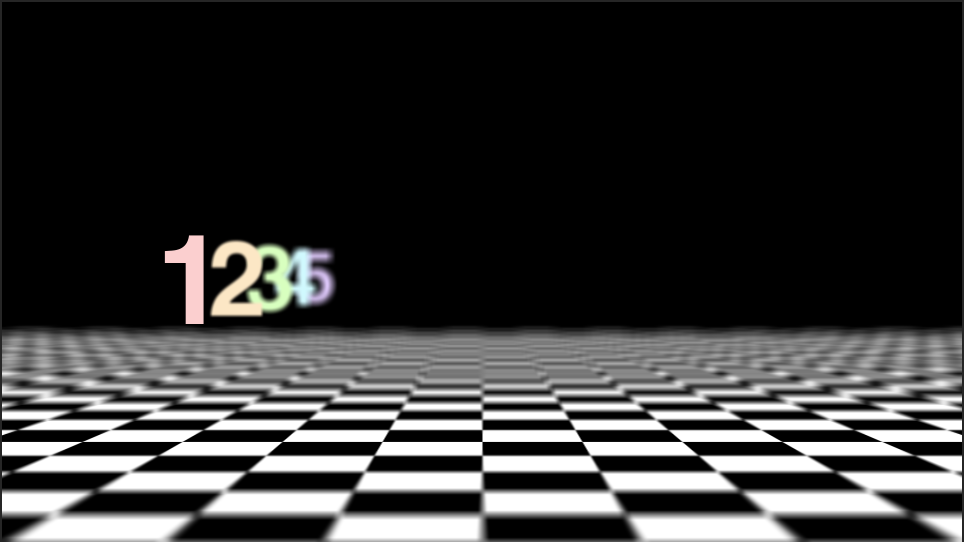 If you have some experience with photography, those basic principles will help you as you define things like focal length and depth of field in the virtual cameras that After Effects uses.  For example, you may be aware that a lens with a large aperture produces images with a shallower depth of field than a lens with a small aperture.  Increasing the Aperture value in After Effects (which is measured in pixels) will therefore give you a more blurred out background when the Depth of Field toggle is enabled.  For reference, the Aperture in the image above is around 400 pixels and the lens is 50mm.  If this is unfamiliar to you, you may just have to experiment with the controls a bit to get the results you are looking for.

The Transform options control camera movement.  You can keyframe the rotation along all three axis, either individually or using the Orientation.  The position works the same as other 3D layers, but there is also a keyframe-able Point of Interest property.  This is the point that the camera is aimed at; so, for example, if you keyframe the camera’s position along the X axis, but don’t adjust the Point of Interest, the camera will move from one side to the other while remaining aimed at the center of the screen.  You can get some cool results this way, so take some time to play around. 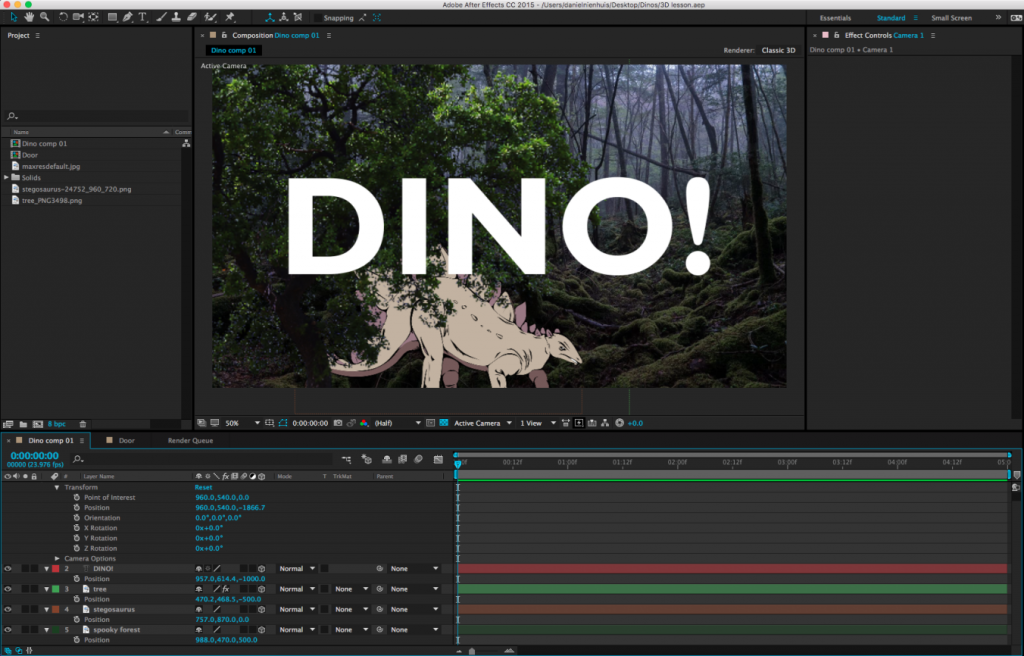 In addition to the control options in the timeline window, you can adjust your camera using a section of tools in the toolbar at the top of the screen.  The default option is the “Unified Camera Tool” (which looks vaguely like a movie camera), but there are several to try out if you prefer more “hands-on” control.

If you’re having a hard time visualizing how exactly your camera is moving, it can be helpful to change the view setting of your composition window.  At the bottom of the window is a dropdown menu that, by default, reads “Active Camera.”  Clicking this will give you different options for viewing your composition in 3D space.  In particular, Custom Views 1, 2, and 3 are helpful for seeing how your camera is positioned and where it is pointed.  Note that you may need to toggle the background visibility on or off (the checkerboard icon next to the view setting) and/or zoom out your view to see what’s going on clearly.  Just switch back to “Active Camera” when you’re done. 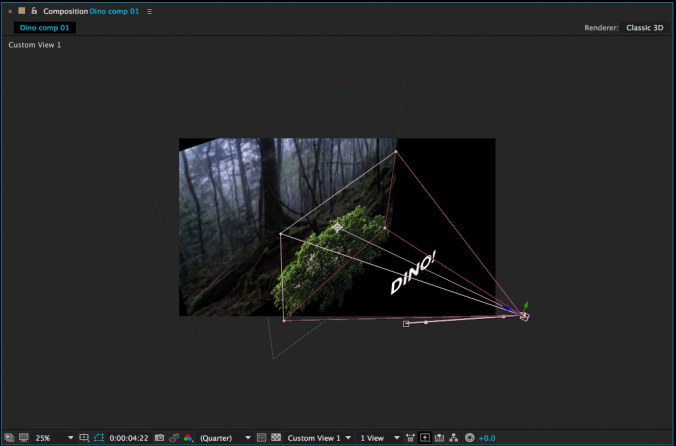 There are many more things to explore when it comes to 3D work in After Effects.  You can create different kinds of virtual lights, control the way simulated shadows are cast, affect how shiny or matte objects are, and so on.  For now, though, just get used to moving objects in 3D space and operating a virtual camera – it will open up a whole new world of creative possibilities.

I want you to be able to focus on your final projects right now, so I’m not assigning a project this week.  However, if you have a missed assignment from sometime during the semester and would like to make it up, you can create a five to ten second composition that uses 3D objects and a moving camera.  Render it as a 1920 x 1080 QuickTime movie using the H.264 codec, upload it to your Google Drive, and send me a download link.