Welcome to the Spring 2017 edition of the Film/Media Studies Production Practicum!  This course is focused on the analysis and creation of animation.  For analysis, we’ll be looking at a variety of pieces from throughout the history of the medium, as well as reviewing and critiquing the work produced in this class.  For creation, we will primarily be using Adobe After Effects, a powerful and versatile program.  We will also use Adobe Photoshop, Adobe Illustrator, and other applications throughout the semester.

There are a few odds and ends we need to take care of before we can really dive into the exciting world of animation.  First, you should make sure that you have this class listed as .5 credit on your schedule.  It defaults to .25 credit, so you may need to change it manually.  If you have trouble with this, please contact Melissa Weber at maweber@bucknell.edu.

I’ll set up access to the course Moodle page for everyone soon, but I generally only use Moodle for grading.  For weekly lessons, we’ll be using this blog: fmspracticumspring2017.blogs.bucknell.edu.  This site will contain assignment details, lectures, work created in class, fun videos to check out, and lots more.  It will essentially be your textbook for the course, so be sure to keep it handy!

The only material required for this class is an external hard drive for saving your work.  I would suggest an external hard drive over a small thumb drive because they are faster and have higher storage capacity.  If you don’t have a hard drive already, I’d suggest getting a USB 3.0 drive with at least 500GB of storage.  You can pick up 1TB drives from the Bertrand Library Equipment Services for around $60.  There are also lots of options at Amazon, Target, Best Buy, etc..  Both the Digital Video Editing Lab in the library and the Marts video studio have networked storage systems, but they are (unfortunately) different networked storage systems and such options are not always completely reliable.  Working of an external hard drive allows you to be mobile.  Of course, I would also suggest backing up important work to a different hard drive, just to be safe.

Before we dive into the creation of animation, though, I want to spend a little time on the ideas behind animation as a medium.

That’s a rhetorical question; of course animation matters.  I considered lecturing about the tragic misunderstanding  surrounding animation; how it is unfairly perceived as little more than children’s entertainment.  But I honestly don’t really see the point.  While the cultural stigmas and expectations surrounding animation are worth considering, they are also pretty obvious.  We all know that animation isn’t just for kids.  I don’t think anyone taking this class needs to be convinced of the medium’s merit.

Instead, let’s consider some of the more subtle qualities of animation.  I think that the following video essays –each focused on very different animators – are both entertaining and insightful.

The Language of Symbols

Now that we’ve absorbed some thoughts on how different animators approach the medium, let’s spend just a little time talking about why animation works at all.  If you step back and consider what happens when you watch an animated film, it’s sort of miraculous that you can make sense of it at all.  Not just because of the inherent strangeness of watching a film or video – although the alchemy of thousands of images coming to life is astounding in its own right – but because animation generally uses symbolic (or “iconic”) visual representation in a very interesting way.

What do you see below?

A face?  A human face tied to a specific emotion?  Why would something so simple call to mind something as complex as a human being experiencing the concept of happiness?  This is the sort of  question that pertains to all visual art, of course, but something about the illusion of life in animation makes it seem especially relevant.

I’m going to borrow pretty heavily from Scott McCloud and his excellent Understanding Comics for this discussion.  McCloud is obviously focused on comics, but a lot of what he writes about is applicable to animation as well.  In his chapter “The Vocabulary of Comics,” McCloud spends a lot of time talking about what he calls icons and how the level of visual realism they carry imbues them with different qualities. 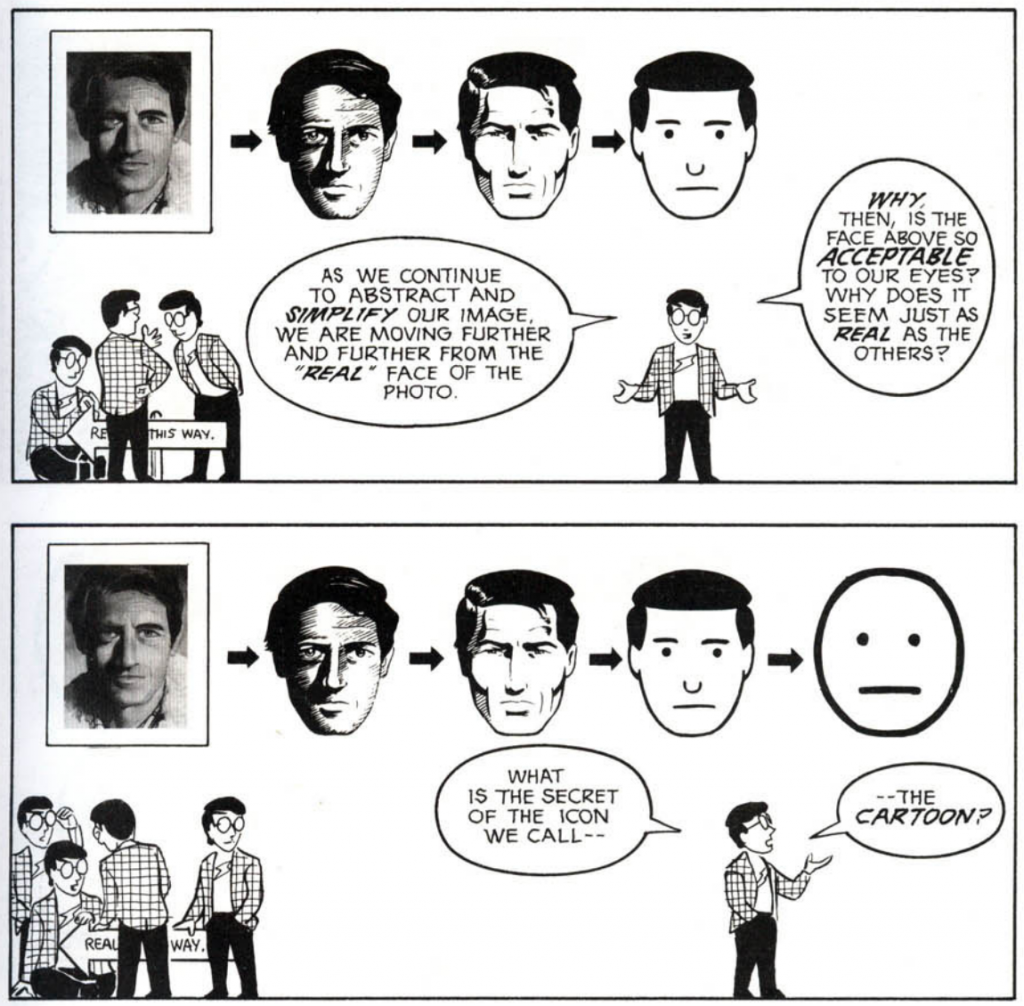 McCloud argues that cartoon icons – simplified visual representations of real-world things – contain a unique power.  For one, the generalization present in cartoon representation allows the viewer to project themselves into the character.  McCloud ties this to the fascination that children have with animated characters.

Another power of cartoon representation lies in its ability to magnify certain qualities of the character or thing being shown.  Because cartoons use fewer elements (details, shading, realistic proportions, etc.), the elements that are present become incredibly potent. 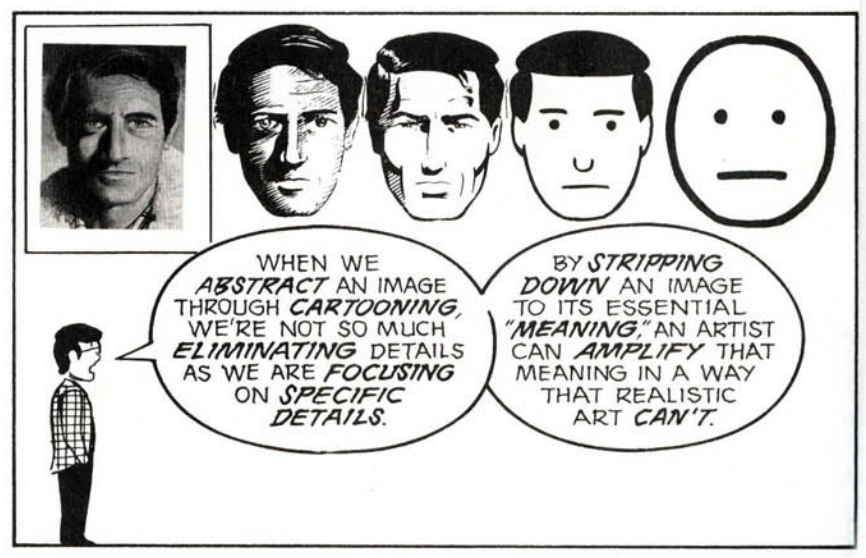 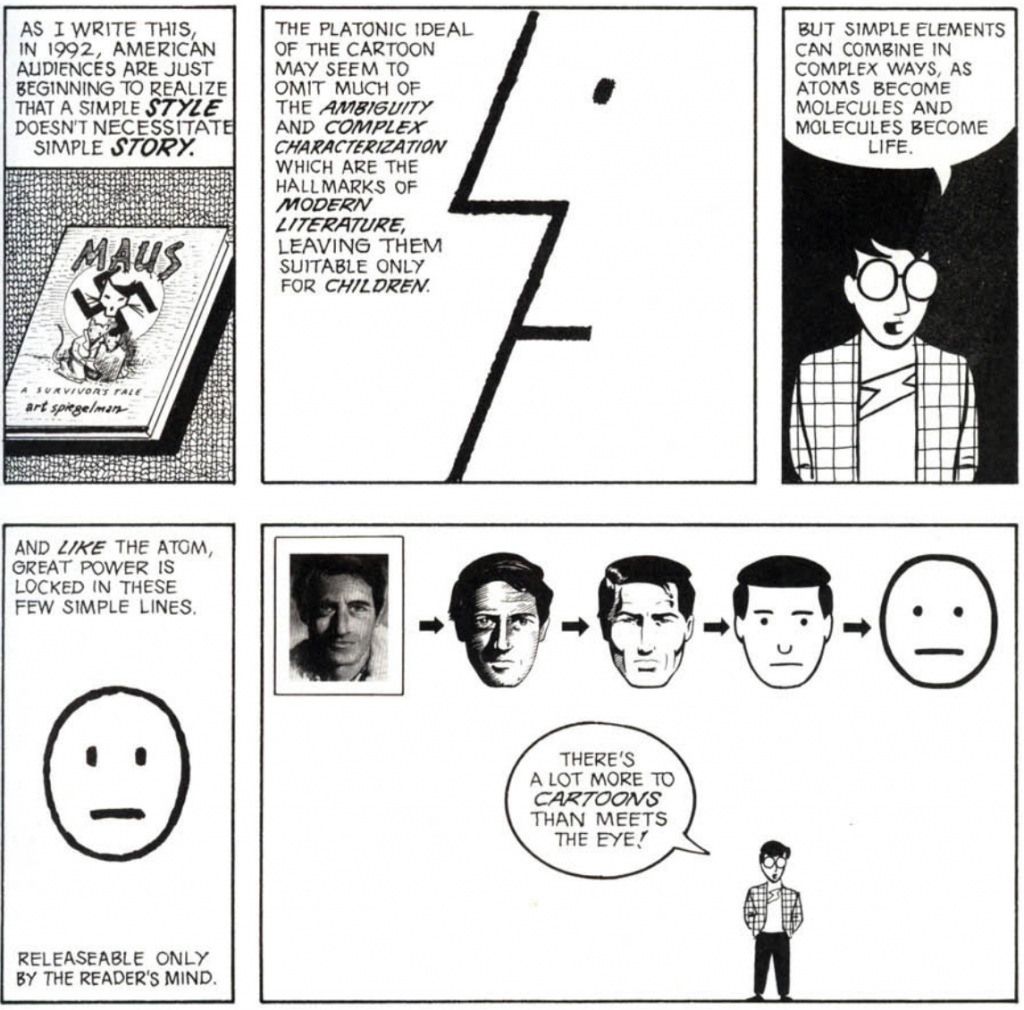 In the following images, the idea of nervousness or fear is shown with decreasing realism.  While the photograph is potent, it’s also complex and specific.  The stick figure (which is from Don Hertzfeldt’s Billy’s Balloon) conveys a similar emotion with far greater economy – and, potentially, more power.  Just as an exercise, consider this: the last time a movie made you really emotional, was it live-action or animated?

I think that it’s really important to watch lots of animation if you’re going to create animation.  Below is a piece from one of my absolute favorite animators, Don Hertzfeldt.

Hertzfeld’s work is funny, tragic, and absurd.  “Everything Will Be OK” is the first of three short films centered on the character Bill.  These films blend photographic elements with meticulously hand-drawn – and highly “iconic” – characters.  Because the figures are drawn so simply, each movement and each line carries tremendous weight.  Things like the way characters move their hands, their posture, or the tiny lines on their faces imbue them with life in a remarkable way.  Hertzfeldt also uses music and sound design in very interesting ways – to highlight the emotional quality of a scene, draw attention to certain details, or surprise the viewer.

For your first assignment, I’d like you to watch an animated short film.  There are lots of channels dedicated to animation on YouTube and Vimeo; you could also try a site like Cartoon Hangover, Cartoon Brew, or Short of the Week.  There are endless options, just find something interesting.  It can be any length, just keep it under 20 minutes.  It must be available to watch (legally) online.

Once you’ve found your short film, write a few sentences about why you think it’s interesting.  How does the animator use imagery and sound?  Are any clever editing techniques being used?  Are the characters iconic or more realistic?  Just write up a brief analysis of the film and email it to me (dan014@bucknell.edu) with a link to the film itself.  Send them to me by next Tuesday night at the latest, so that I can review the films and post them online before class.